Howdy, howdy!  Due to the random sicknesses of the past couple of months, I forgot to request a book from NetGalley for March.  Luckily, I had a book on my to-be-read list that I’ve been looking for an excuse to read ever since it came out in July of last year.  My love of mermaids automatically drew me towards Sea Witch by Sarah Henning.  The fact that it sounded like a new take on the Little Mermaid (my favorite fairy tale) sealed the deal.  I had to read it.  But that’s enough of why I chose it, let’s get to the review.

Sarah Henning’s Sea Witch tells the story Evie, a peasant and a witch, who not only has to hide her power, but also has to put up with the townsfolk accusing her of not knowing her place just because she’s best friends with the prince (Nik) and close to his cousin (Iker), another prince.  When her other best friend, Anna, was taken by the sea, Evie’s whole life fell apart until she thrust herself into studying magic.  Evie and Nik never stopped mourning Anna, but when a mysterious stranger who resembles their dead friend appears, Evie finds herself a purpose: keeping her new friend on land.  Unfortunately, Evie has no idea what kind of magic it will take, nor does she understand the repercussions until it’s too late.

This isn’t some Disney-ified version of the tale with replicas of Ariel and Ursula and Erik.  These characters are mostly well-developed and have a nice balance between light and dark within them.  However, I do admit that Iker and Nik could have used a bit more personality.  Nik was an ideal prince through and through.  I wanted him to be a little selfish and at least make his desires known.  Iker, on the other hand, is a stereotypical playboy prince who turns his back on Evie when he thinks she’s a threat to him and his family.

As far as the plot goes, I have some issues with the reasoning behind Annemette’s whole revenge thing.  I just don’t believe someone who was always best friends with these people would blame them like that.  But I’ll say it was because of her lack of a soul.  I’m sure that would corrupt people and make them do weird things.  But other than that, I have no real qualms with the book.  In fact, I’m really happy the story didn’t take the happy ending route where friendship conquers everything.  That would’ve been far too sappy a climax and not a fitting tribute to the original Little Mermaid.

The writing is mostly smooth and enjoyable.  Most of the romance between Evie and Iker comes off as corny and more funny than I think it was supposed to, but I got a good chuckle out of it.  I also admit that a couple of the past sections confused me.  At one point, I’m not entirely sure if Iker or Nik is the main character for one of those parts.  It’s easy enough to figure it out after the fact, but during it, I was super confuzzled.

Ultimately, I’m glad I found this book.  A friend actually pointed out that a second one is coming out this year.  I will definitely be picking it up to see what Evie is up to next.

Overall, I gave Sea Witch four out of five stars.  If you love mermaids or witches or both, this book is a worthy addition to your library.  Bonus points if you’re into fairy tale retellings!

Hello, hello!  August is chugging along.  My revisions are going surprisingly well so far.  I keep waiting to hit a wall or something, but my sticky notes are keeping me on track.  Sometimes, my main character feels a bit too feminine, but I like him that way, so I’ll deal with it later if I have to.  Otherwise, I don’t have much to ramble about this week.  Because of that, I decided to share my reading-list-thus-far for September through December.  This list may or may not include books for my monthly reviews.  I haven’t decided on those yet.

Trail of Lightning by Rebecca Roanhorse.  I’m reading this for the reading group I’m in.  It sounds like something I’ll enjoy.  Here’s the description from Amazon:

While most of the world has drowned beneath the sudden rising waters of a climate apocalypse, Dinétah (formerly the Navajo reservation) has been reborn. The gods and heroes of legend walk the land, but so do monsters.

Maggie Hoskie is a Dinétah monster hunter, a supernaturally gifted killer. When a small town needs help finding a missing girl, Maggie is their last best hope. But what Maggie uncovers about the monster is much more terrifying than anything she could imagine.

Maggie reluctantly enlists the aid of Kai Arviso, an unconventional medicine man, and together they travel the rez, unraveling clues from ancient legends, trading favors with tricksters, and battling dark witchcraft in a patchwork world of deteriorating technology.

As Maggie discovers the truth behind the killings, she will have to confront her past if she wants to survive.

Welcome to the Sixth World.

Dim Sum of All Fears by Vivien Chien.  It’s the second in the Noodle Shop Mystery series.  You can find my review of the first book here.  I enjoyed it enough that I’m giving this one a shot.  Here’s the description from Amazon:

Lana Lee is a dutiful daughter, waiting tables at her family’s Chinese restaurant even though she’d rather be doing just about anything else. Then, just when she has a chance for a “real” job, her parents take off to Taiwan, leaving Lana in charge. Surprising everyone—including herself—she turns out to be quite capable of running the place. Unfortunately, the newlyweds who just opened the souvenir store next door to Ho-Lee have turned up dead. . .and soon Lana finds herself in the midst of an Asia Village mystery.

Between running the Ho-Lee and trying to figure out whether the rock-solid Detective Adam Trudeau is actually her boyfriend, Lana knows she shouldn’t pry into the case. But the more she learns about the dead husband, his ex-wives, and all the murky details of the couple’s past, the more Lana thinks that this so-called murder/suicide is a straight-up order of murder. . .

The Strange Case of the Alchemist’s Daughter by Theodora Goss.  I’ve been meaning to try this one since it came out, but never quite got around to it.  Now, the reading group I’m in chose it for October, so I have no excuse not to read it.  Here’s Amazon’s description:

Mary Jekyll, alone and penniless following her parents’ death, is curious about the secrets of her father’s mysterious past. One clue in particular hints that Edward Hyde, her father’s former friend and a murderer, may be nearby, and there is a reward for information leading to his capture…a reward that would solve all of her immediate financial woes.

But her hunt leads her to Hyde’s daughter, Diana, a feral child left to be raised by nuns. With the assistance of Sherlock Holmes and Dr. Watson, Mary continues her search for the elusive Hyde, and soon befriends more women, all of whom have been created through terrifying experimentation: Beatrice Rappaccini, Catherin Moreau, and Justine Frankenstein.

When their investigations lead them to the discovery of a secret society of immoral and power-crazed scientists, the horrors of their past return. Now it is up to the monsters to finally triumph over the monstrous.

Two Girls Down by Louisa Luna.  This one’s a bonus suggestion from the reading group.  It sounds cool, so I’m going to give it a shot.  I’m putting it down tentatively for an October read, but I might save it for later.  Here’s the description from Amazon:

When two young sisters disappear from a strip mall parking lot in a small Pennsylvania town, their devastated mother hires an enigmatic bounty hunter, Alice Vega, to help find the girls. Immediately shut out by a local police department already stretched thin by budget cuts and the growing OxyContin and meth epidemic, Vega enlists the help of a disgraced former cop, Max Caplan. Cap is a man trying to put the scandal of his past behind him and move on, but Vega needs his help to find the girls, and she will not be denied.
With little to go on, Vega and Cap will go to extraordinary lengths to untangle a dangerous web of lies, false leads, and complex relationships to find the girls before time runs out, and they are gone forever.

European Travel for the Monstrous Gentlewoman by Theodora Goss.  The second in her series.  The reading group I’m in decided to read both of Dora’s books in a row because she’s amazing.  I admit the length of this one is a little daunting (720 pages), but I can do it!  Especially if I can start a little early on it.  Here’s Amazon’s description:

Mary Jekyll’s life has been peaceful since she helped Sherlock Holmes and Dr. Watson solve the Whitechapel Murders. Beatrice Rappaccini, Catherine Moreau, Justine Frankenstein, and Mary’s sister Diana Hyde have settled into the Jekyll household in London, and although they sometimes quarrel, the members of the Athena Club get along as well as any five young women with very different personalities. At least they can always rely on Mrs. Poole.

But when Mary receives a telegram that Lucinda Van Helsing has been kidnapped, the Athena Club must travel to the Austro-Hungarian Empire to rescue yet another young woman who has been subjected to horrific experimentation. Where is Lucinda, and what has Professor Van Helsing been doing to his daughter? Can Mary, Diana, Beatrice, and Justine reach her in time?

Racing against the clock to save Lucinda from certain doom, the Athena Club embarks on a madcap journey across Europe. From Paris to Vienna to Budapest, Mary and her friends must make new allies, face old enemies, and finally confront the fearsome, secretive Alchemical Society. It’s time for these monstrous gentlewomen to overcome the past and create their own destinies. 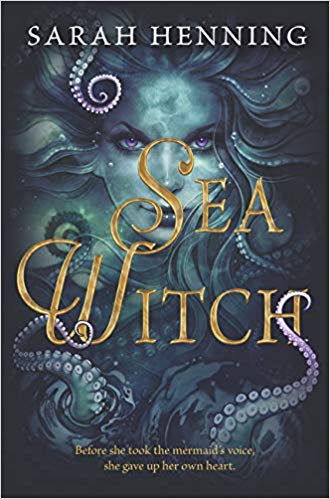 Sea Witch by Sarah Henning.  I’ve been looking forward to this one since I found out about it six months ago.  I was super happy when the reading group I’m in decided to give it a shot.  For now, I’ll save it for December, but if I get a chance, I might tackle this one earlier.  Here’s the description from Amazon:

Ever since her best friend Anna died, Evie has been an outcast in her small fishing town. Hiding her talents, mourning her loss, drowning in her guilt.

Then a girl with an uncanny resemblance to Anna appears on the shore, and the two girls catch the eyes of two charming princes. Suddenly Evie feels like she might finally have a chance at her own happily ever after.

But magic isn’t kind, and her new friend harbors secrets of her own. She can’t stay in Havnestad—or on two legs—without Evie’s help. And when Evie reaches deep into the power of her magic to save her friend’s humanity—and her prince’s heart—she discovers, too late, what she’s bargained away.

I’ll need to pick at least two more books to keep up with my two books a month goal, but I haven’t decided on all of them.  Plus, I have to wait for NetGalley to get back to me about some books to review.  I should probably get something festive for the holiday season.  Maybe a Christmas cozy?  Otherwise, this is my reading list until next year.  What’s on your list for the foreseeable future?  Feel free to share your list or suggestions or comments here or on my social media pages!