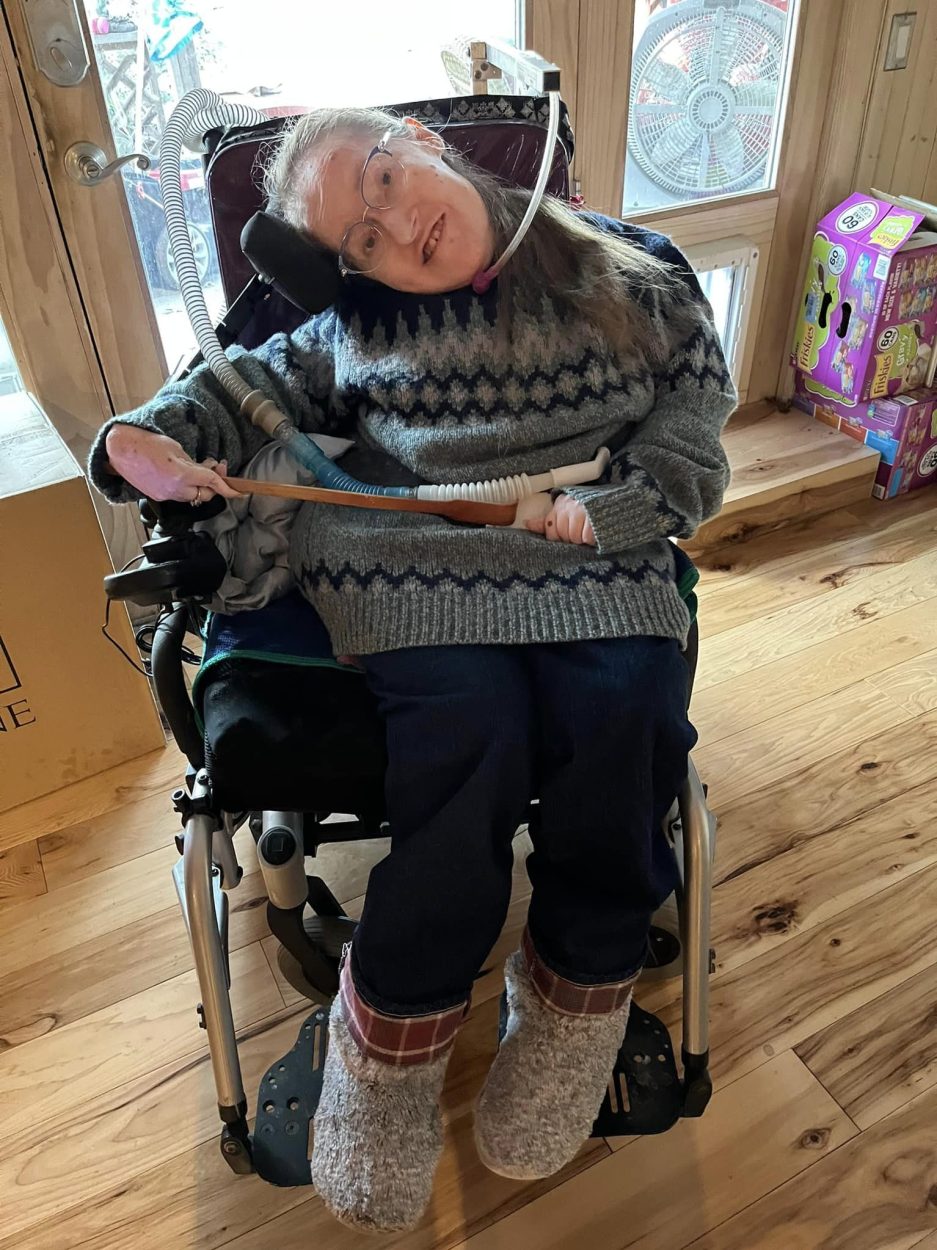 Hello, hello!  As I mentioned in my last post, I’ve been slacking on my reading lately, but I’ve started up again.  I thought I would use this week’s post as a chance to share the next five books on my ever-expanding reading list.  I’ve decided to keep them in the “fun” category, at least until I get back into a good rhythm, then I’ll probably add in some craft books and maybe some classics.  After all, part of a writer’s job is to read.  So, here are the books, in no particular order. 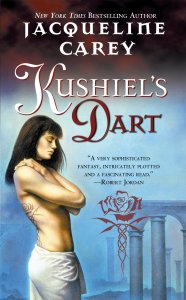 1. Kushiel’s Dart by Jacqueline Carey.  This is actually the book I’m currently reading, because a friend recommended it.  I’m only 75ish pages in, but my initial thoughts are that I really like the story, there are just a lot of words (it’s kind of flowery, which makes it difficult for me to read more than a couple of chapters at a time).

The land of Terre d’Ange is a place of unsurpassing beauty and grace. It is said that angels found the land and saw it was good…and the ensuing race that rose from the seed of angels and men live by one simple rule: Love as thou wilt.

Phèdre nó Delaunay is a young woman who was born with a scarlet mote in her left eye. Sold into indentured servitude as a child, her bond is purchased by Anafiel Delaunay, a nobleman with very a special mission…and the first one to recognize who and what she is: one pricked by Kushiel’s Dart, chosen to forever experience pain and pleasure as one.

Phèdre is trained equally in the courtly arts and the talents of the bedchamber, but, above all, the ability to observe, remember, and analyze. Almost as talented a spy as she is courtesan, Phèdre stumbles upon a plot that threatens the very foundations of her homeland. Treachery sets her on her path; love and honor goad her further. And in the doing, it will take her to the edge of despair…and beyond. Hateful friend, loving enemy, beloved assassin; they can all wear the same glittering mask in this world, and Phèdre will get but one chance to save all that she holds dear.

Set in a world of cunning poets, deadly courtiers, heroic traitors, and a truly Machiavellian villainess, this is a novel of grandeur, luxuriance, sacrifice, betrayal, and deeply laid conspiracies. Not since Dune has there been an epic on the scale of Kushiel’s Dart-a massive tale about the violent death of an old age, and the birth of a new. 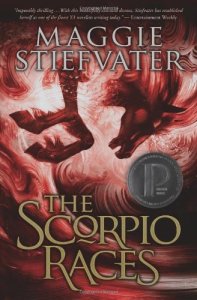 2. The Scorpio Races by Maggie Stiefvater.  I ran across the opening of this one while searching for quotes for my website and decided to check it out.  I’m looking forward to reading it.

Some race to win. Others race to survive.

It happens at the start of every November: the Scorpio Races. Riders attempt to keep hold of their water horses long enough to make it to the finish line.
Some riders live.
Others die.
At age nineteen, Sean Kendrick is the returning champion. He is a young man of few words, and if he has any fears, he keeps them buried deep, where no one else can see them.
Puck Connolly is different. She never meant to ride in the Scorpio Races. But fate hasn’t given her much of a choice. So she enters the competition – the first girl ever to do so. She is in no way prepared for what is going to happen. 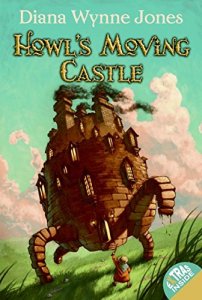 3. Howl’s Moving Castle by Diana Wynne Jones.  I’ve seen the anime a few times, and there was always something missing from it for me, so I’ve decided to read the book to see if I can figure out what that missing bit is.

Sophie has the great misfortune of being the eldest of three daughters, destined to fail miserably should she ever leave home to seek her fate. But when she unwittingly attracts the ire of the Witch of the Waste, Sophie finds herself under a horrid spell that transforms her into an old lady. Her only chance at breaking it lies in the ever-moving castle in the hills: the Wizard Howl’s castle. To untangle the enchantment, Sophie must handle the heartless Howl, strike a bargain with a fire demon, and meet the Witch of the Waste head-on. Along the way, she discovers that there’s far more to Howl—and herself—than first meets the eye. 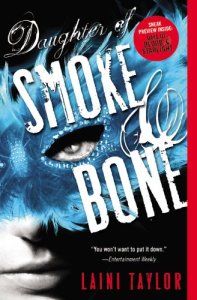 4. Daughter of Smoke & Bone by Laini Taylor.  I came across this one a while back while browsing books on Amazon.  It sounded interesting, so I bought an ebook copy, then forgot I had it.  It’s about time for me to get to it.

Around the world, black handprints are appearing on doorways, scorched there by winged strangers who have crept through a slit in the sky.

In a dark and dusty shop, a devil’s supply of human teeth grown dangerously low.

And in the tangled lanes of Prague, a young art student is about to be caught up in a brutal otherwordly war.

Meet Karou. She fills her sketchbooks with monsters that may or may not be real; she’s prone to disappearing on mysterious “errands”; she speaks many languages–not all of them human; and her bright blue hair actually grows out of her head that color. Who is she? That is the question that haunts her, and she’s about to find out.

When one of the strangers–beautiful, haunted Akiva–fixes his fire-colored eyes on her in an alley in Marrakesh, the result is blood and starlight, secrets unveiled, and a star-crossed love whose roots drink deep of a violent past. But will Karou live to regret learning the truth about herself? 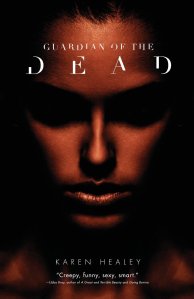 5. Guardian of the Dead by Karen Healey.  This book was recommended reading for a lecture I attended at Stonecoast, but I never got around to reading it.  It sounds interesting, so I think I’ll give it a shot.

I opened my mouth, just as he added, “And your eyes are opening.”

Seventeen-year-old Ellie Spencer is just like any other teenager at her boarding school. She hangs out with her best friend Kevin, she obsesses over Mark, a cute and mysterious bad boy, and her biggest worry is her paper deadline.

But then everything changes. The news headlines are all abuzz about a local string of serial killings that all share the same morbid trademark: the victims were discovered with their eyes missing. Then a beautiful yet eerie woman enters Ellie’s circle of friends and develops an unhealthy fascination with Kevin, and a crazed old man grabs Ellie in a public square and shoves a tattered Bible into her hands, exclaiming, “You need it. It will save your soul.” Soon, Ellie finds herself plunged into a haunting world of vengeful fairies, Maori mythology, romance, betrayal, and an epic battle for immortality.

Well, that’s (a tiny excerpt from) my current reading list.  Feel free to share your list or recommend some books for me on here or on my social media pages!